As the first publicly gay Australian children’s writer and the author of the first Australian kids’ book with a gay main character, I suppose I’d have to tick the ‘gay activist’ box but I’m a very reluctant gay activist. While I’m deeply opposed to sexism, racism and class systems, I can at least understand where they originate from but discrimination against LGBTQI people just plain mystifies me. However, as a writer and, more particularly, a writer for younger readers, I soon realised that if I wanted to follow the standard advice to ‘write about what you know’, I’d have to start by changing the world.

So I gave it a go. These stories and articles will give you some idea of how that went.

‘Adolescent Homosexuality: a Novel Problem’ was first published in Gay Information, no 6, Winter 1981. I’d been reading all the American young adult novels with LGBQ main characters that I could find and I had a lot of criticisms of them, which I sorted out by writing them down. These days I’d place more emphasis on the writers’ courage in taking on a taboo subject but at the time I was clearly summoning my own courage: my biographical note at the end of the article said, “Jenny Pausacker reads, writes and teaches children’s literature and really ought to get around to writing an adolescent novel about lesbians”, as indeed I did.

‘Waiting for the Publisher’ is my only completely autobiographical short story. Usually, I write about things long after they’ve happened but I wrote ‘Waiting for the Publisher’ while – you guessed it – I was waiting for a publisher to decide whether or not to accept my novel What Are Ya? I saw this story as something so personal that it was almost self-indulgent, so I was surprised and pleased when it was published in a magazine, reprinted in an anthology and proved to be enduringly popular at readings: it turns out that everyone knows what it’s like to wait around while other people make life-changing decisions about them.

‘The Lesbian? No, Thanks: on Being a Publicly Gay Children’s Writer 1987 – 2007’ could be described as me interviewing myself. Over the years a lot of oral historians have interviewed me about my participation in the Gay Liberation and Women’s Liberation Movements during the 1970s – in the last two years, for instance, I’ve talked to interviewers about being an Australian lesbian in London during the 1970s and about my part in the Women’s Movement Children’s Literature Cooperative – but as far as I can remember, no one has ever asked me to talk about being a publicly gay children’s writer. So I decided to take this opportunity to write down everything I remember, before I lose interest and / or start to forget the details.

‘Killing the Vampires’ is the transcript of a talk given by American young adult writer and editor David Levithan at the 2007 Reading Matters conference in Melbourne, in which he points out that ‘Books [about being LGBTQI] can help. But books can only help if you get them to the kids.’

‘Tight’ is an eloquent account of reading my novels over the years, written by Sabdha Charlton for a Florilegium – a collection of short pieces about my work – that my partner Ika Willis organised for my sixtieth birthday.

‘So Gay: a List of Australian Children’s and Young Adult Contemporary Realist Novels with LGBQ Characters 1985 – 2015 (plus three remixes)’ came about because, while I was working on ‘The Lesbian? No Thanks’, I discovered that it was possible for LGBQ and LGBQ-friendly writers and reviewers to be completely unaware of a 30 year tradition in Australian children’s literature of writing about characters who identify or are identified as gay male, lesbian, bisexual or questioning. I started to jot down a list of the books that had been forgotten … and six months later I’d found and annotated 86 Australian children’s and young adult contemporary realist novels, containing 321 characters explicitly identified as LGBQ.

Off the Wall: Stories about being young and gay / lesbian

This ebook is the first time all my short stories about being young and gay / lesbian have been gathered together. When I was asked to write a story for an anthology someone else was editing, I often used to write about LGBQ characters, because it gave me a chance to investigate all sorts of different aspects of being LGBQ – and because it meant that the anthology as a whole would reflect the fact that, as my favourite political slogan says, “some people are gay”. Some of these stories are funny and some are sad; some of them are about coming out to yourself, some are about how to deal with the way other people react and some are about getting on with the everyday business of being LGBQ. 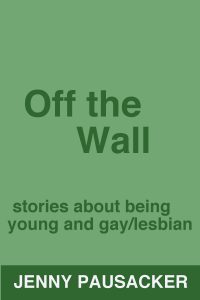